Great news for Alvaro Soler's Polish fans! Next Monday 31st of December, Alvaro will be performing at the Polish New Year's Eve Concert "Sylwester Marzeń" ("New Year's Eve Dreams) hosted by the TV channel TVP2 which will take place on a big stage in the park Dolna Równia Krupowa in Zakopane. The concert, which will be broadcast live by TVP2, will start at 8pm, and access is free! If you live in Poland, don't miss this great chance to see Alvaro live on New Year's Eve! ¡Gran 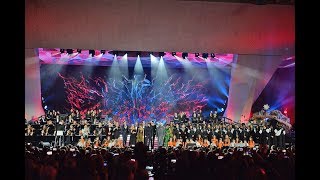 Alvaro and the other headliners of the Italian benefit concert Concerto di Natale bring a wonderful,

On Saturday 15th of December, Alvaro was one of the headliners of the traditional Italian Christmas Concert "Concerto di Natale" celebrated at the Aula Paolo VI in Vatican City in order to raise money for papal relief funds in support of refugees and millions of poor children without access to good education. In addition to performing La Cintura and the Catalan christmas carol Fum Fum Fum, Alvaro also joined the other artists of the lineup to sing together John Lennon's song

Together with other famous international artists, such as Anastacia, Alvaro Soler participated in the traditional Italian Christmas Concert 'Concerto di Natale', which took place last Saturday 15th of December in the evening at the Aula Paolo VI in Vatican City. Alvaro performed his hit La Cintura and a Catalan Christmas carol, and also covered Elton John's well-known Christmas song Happy Xmas (War is Over), singing in a choir with the others. The proceeds of the concert go

La Cintura has become 3x Platinum in Italy and in Spain!

After accumulating over 200 million streams on Spotify and over 170 views on Youtube, and after peaking at number 5 on the Global ITunes chart, at number 20 on Global Shazam and at 39 on Global Spotify, Alvaro's world hit La Cintura has also reached 3x Platinum status in Italy, and is also 3x Platinum in his country Spain! Lots of congratulations, Alvaro, on reaching this amazing level of success for La Cintura! *** Después de acumular más de 200 millones de streams en Spoti 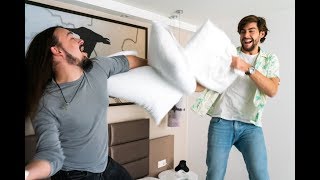 Spiesser pillow fight with Alvaro Soler. Check out this cool interview by Alvaro to the German teen

Last night Alvaro was one of the headliners of the German TV event The Dome which took place at the König-Pilsener-Arena in Oberhausen. He performed his top hit La Cintura. Anoche Álvaro fue uno de los protagonistas del evento de televisión alemán The Dome celebrado en el König-Pilsener Arena en Oberhausen. Interpretó su éxitazo La Cintura. Credits: Thanks to Vd448 for this video on your Youtube channel Credits: Thanks to Marie Brandt for this video on your Youtube channel C