Last night Alvaro Soler was one of the invited stars performing at the Belgian (Flemish) TV gala "Gala van de Gouden K's (the Golden K Awards Gala) hosted by the children's channel Ketnet, which was held at the Sports Palace in Antwerp. During the gala Alvaro delivered an outstanding performance of his hit La Cintura. Other headliners performing at the awards event were Niels Destadsbader, Laura Tesoro and the Belgian DJ Regi. Alvaro was also nominated for a Golden K Award

Alvaro's new single Loca is out today! Listen, sing and dance to Loca, download it now on ITunes

Today Alvaro Soler has released his new single, which has the title "Loca"! Alvaro's new release Loca is an amazing song, very beautiful and special, it has touching lyrics about crazy, desperate love, lyrics full of emotion, and its style is different from Alvaro's previous hits. We're sure that Alvaro's new song Loca is going to be a huge hit too, just like his last hit La Cintura! Let's all support Alvaro as much as possible with Loca, so that this amazing song will becom 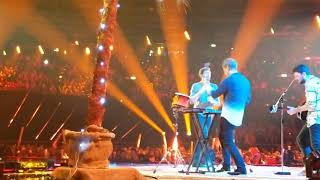 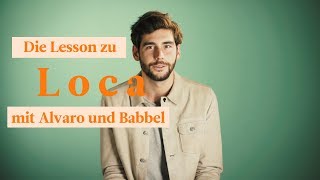 Do you want Alvaro to be your Spanish teacher? Learn Spanish with Alvaro on Babbel with the lyrics o

There are only 4 days left for the release of Alvaro Soler's new single Loca this Friday January 25th! Are you also feeling so impatient to hear it already? Well, the good news is that you can watch Alvaro pronounce fragments of the lyrics of his new, still unreleased single Loca on the language app Babbel and in this way learn some Spanish! So don't wait to learn Spanish with Alvaro on Babbel, by listening to the lyrics of his new release Loca. Register here on Babbel (and e

Alvaro's Mar de Colores European Tour 2019 is having a huge success; his two concerts in Utrech

Good news! Alvaro Soler's concert at the Tivoli Vredenburg in Utrecht (Netherlands) is sold-out! This is Alvaro's second sold-out show of his upcoming Mar de Colores European Tour after that last week all tickets were sold out for his concert in Poznan (Poland)! So the Alvaro Soler Mar de Colores Europe Tour 2019 is on its way to become the most successful and best tour of this year! Lots of congratulations to Álvaro on this amazing achievement! You're really the best singe

Be ready for the release of Alvaro's new single, Loca, out on Friday 25th of January!

There are only 13 days left before the release of Alvaro's new single, which will be out on Friday January 25th! Today Alvaro revealed on his official Instagram page the title of his new single, which is "Loca", and the single cover (see below). This single cover is very beautiful, and shows us the Japanese translation of the song title, a reference to Tokyo, the city where Alvaro spent 7 years of his youth (from the age of 10 until 17). The truth is that we really can't wai 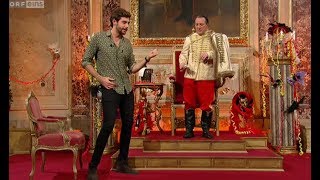 Alvaro appeared on the Austrian TV comedy show Wir Sind Kaiser, which was aired last night at 8:15pm on the Austrian TV channel ORF, and was filmed last month, on the 10th of December 2018, in Vienna. On this cool episode, Alvaro is received by the "emperor" of the Austrian empire, and sitting by his throne, he delivers a wonderful acoustic performance of his hit La Cintura, tells about his experience of working with Jennifer Lopez, and about his roots, and in order to persu 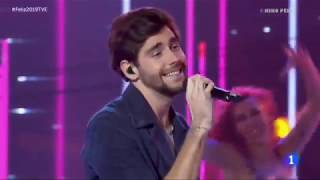 Last Monday, On New Year's Eve, Alvaro Soler set the stage on fire during his outstanding concert at the Polish New Year's Eve event "Sylwester Marzen", which took place at the park Dolna Równia Krupowa in the Polish city of Zakopane and was hosted and aired live by TVP2. Access was totally free to the public. Alvaro delivered a live performance of great quality, putting a quick end to some groundless doubts whether or not he would sing playback in the same way the artists in