Alvaro is very busy working on his new album. Some photos of Alvaro in the studio

This year Alvaro is not touring due to the corona pandemia, but of course that doesn't mean that he's inactive, on the contrary, he has been working very hard. This year Alvaro has been busy working on his third studio album, which will be released next year. In order to write and record his new album, Alvaro spends a lot of time in his recording studio in Madrid and on a regular basis he also travels to Berlin, where he has a second recording studio. The corona crisis has se

Congratulations Alvaro on having over 3 million subscribers on Youtube! 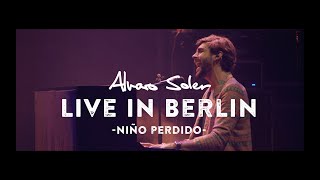 Due to the covid-19 pandemic artists have stopped touring and also Alvaro doesn't give any concerts for now. I'm missing Alvaro very much, and I feel a lot of nostalgia when thinking back of his German Mar de Colores Tour in September last year, of which I attended two shows, in Hamburg and in Stuttgart. Alvaro kicked off his German Mar de Colores Tour with a great concert in Berlin on Saturday September 14th 2019, a concert I would like to remember with some videos Alvaro ha